Should I Use Plenum or Non-Plenum Rated Cable?

Whether you’re a professional installer, a DIY kind of homeowner, or just curious, knowing when to use plenum or non-plenum rated cable is extremely important. Using the correct cables when installing a signal booster or any networking system will keep commercial and residential buildings up to code and most importantly… keep occupants safe. This guide will go over what plenum and non-plenum cables are, when and where to use them, as well as answer many more questions.

Plenum is an HVAC term used to identify open airspaces – usually above drop-down ceilings or below raised floors – which facilitate airflow circulation for heating and cooling. In most plenum airspaces, air ducts are used to connect the HVAC unit and the supply vents to distribute the air supply throughout a building. The return vents don’t use ducting to feed the HVAC unit, creating an open airspace.

In other words, the HVAC unit pulls the return air within the open airspace and circulates it back to the supply vents. Even if both supply and return vents used ducting - a non-plenum airspace - a leaky duct can create an accidental plenum airspace. 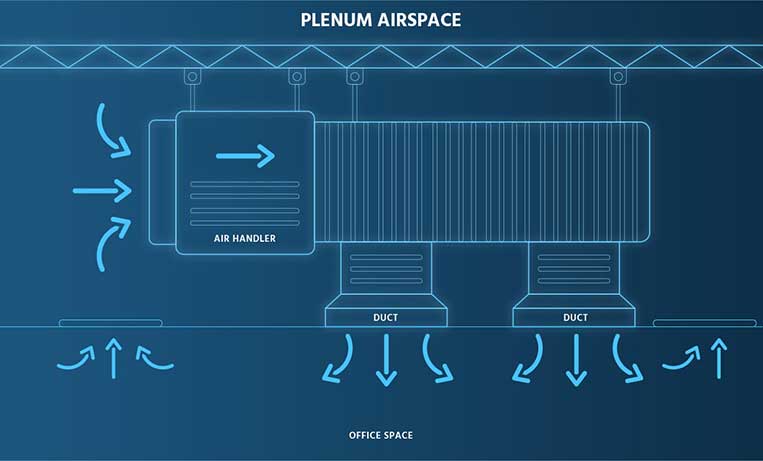 While important for air circulation, the open airflow can quickly spread fire and smoke throughout a building. Because of this risk, any cable installed within plenum areas must be plenum-rated. Non-plenum cable will help spread the fire and introduce a higher level of toxic smoke.

What is Plenum and Non-Plenum Rated Cable? 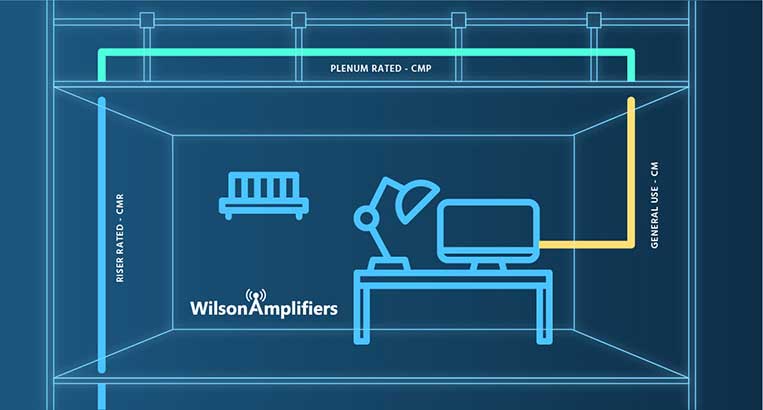 Plenum and non-plenum cables can be any type of cable – coaxial, Ethernet, HDMI, fiber optic, etc. The term “Plenum” and “Non-Plenum” simply refers to the outer jacket/cover that protects the cable.

Plenum-rated cables, also known as CMP (Communications Multipurpose Plenum), have the highest flame rating and the highest cost. They're covered with a low-smoke polyvinyl chloride (PVC) or fluorinated ethylene polymer (FEP) fire-retardant jacket. The jacket is designed to restrict flame propagation within 5 ft, reduce the amount of smoke and toxic fumes released, and self-extinguish in the event of a fire. Thus, fire and building safety codes mandate plenum-rated cables be used in plenum spaces and air ducts. They can also be used in non-plenum areas.

Non-Plenum cables, on the other hand, are much cheaper and not as fire-resistant. When burned, they release toxic fumes such as hydrochloric acid and dioxin. Therefore, they may not be used in plenum areas. Otherwise, deadly gas will rapidly circulate through the building. The two most common non-plenum cables are riser-rated cable or CMR (Communications Multipurpose Riser) and CM (Communications Multipurpose).

CMR cables are mainly used in risers and vertical shafts to run cable through multiple floors. They are designed to prevent fires from spreading between floors. CM cable is the least fire-resistant and the cheapest. It’s suited for general installations, like connecting a computer to a wall, and can also be used in areas without fire code restrictions on cable types.

Difference Between Plenum and Non-Plenum Cables

When Should Plenum Cable be Used?

Article 800 of the National Electrical Code (NEC) states that plenum cable should ALWAYS be used in plenum airspaces and air ducts to slow down the spread of flames and reduce smoke and toxic fumes from circulating throughout the building. Due to their higher safety standards, they can be freely installed inside plenum areas – no need to use a conduit. In addition, they can also be installed in non-plenum spaces.

If you're installing a signal booster, a WiFi network, a distributed antenna system (DAS), or a TV system, coaxial cable will likely need to be ran through plenum spaces. The following are our plenum-rated coaxial cables: 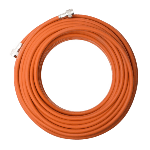 Do I Need Plenum Rated Cable in My Home?

While it's definitely acceptable to use plenum-rated cable in your home to install a residential signal booster, a WiFi network, or something else, more often than not, it’s not necessary. Most residential buildings don’t have plenum airspaces. Plenum areas are more common in commercial buildings. However, if your house does happen to have a plenum airspace or you need to run cables through an air duct, then plenum-rated cable is required.

How do I Know if a Cable is Plenum Rated?

The numbers and letters printed on the cable’s jacket will usually tell you everything you need to know about the cable, such as the jacket rating, who manufactured it, who verified it, temperature rating, reference number, and more. Here is a great and easy read on how to read a cable’s jacket legend.

If the cable is verified by UL (Underwriter Laboratories), a recognized testing laboratory that tests cables, you can look up the reference number on UL’s website to ensure it’s plenum-rated.

However, if the cable doesn’t have a jacket legend, ask the seller for the reference number and certification company to make sure you aren’t buying fake plenum-rated cable. If the seller doesn’t want to give you the information, we recommend looking elsewhere.

When Should Non-Plenum Cable be Used?

Non-plenum cable (CMR and CM) can be safely installed inside walls, across open ceilings, and any non-plenum area.

Remember, each cable has different uses and should be used within its intended purpose. For example, since CMR cable is designed to connect multiple floors, it should be used inside risers and vertical shafts. Though, since it’s more fire-resistant than CM cable, it can also be used in place of CM cable. However, CM cable cannot be used in areas where riser cable is required.

Since non-plenum cables are less fire-resistant and release more smoke, they should not be installed inside plenum airspaces. However, depending on your building code requirements, you may be able to install non-plenum cable in plenum areas if it’s run through a plenum conduit. The conduit can help stop fires that ignited within it and contain the smoke. While cost-effective, running non-plenum cable through a conduit is not the best choice in every situation. When installing a signal booster, for example, a hole would need to be made to the conduit to run the coaxial cable out and connect it to the indoor cellular antennas, which defeats the purposes of the conduit.

In addition, just because plenum airspaces are located above drop ceilings doesn’t mean that all ceiling spaces are plenum. If there is no open-air circulation – meaning, air-tight ducting is being used to encapsulate the return and supply air – non-plenum cables can be used. Before installing non-plenum cables inside a “non-plenum airspace” carefully inspect the area to ensure there are no leaky ducts. If those cables catch fire, the smoke and toxins will circulate through the leak. 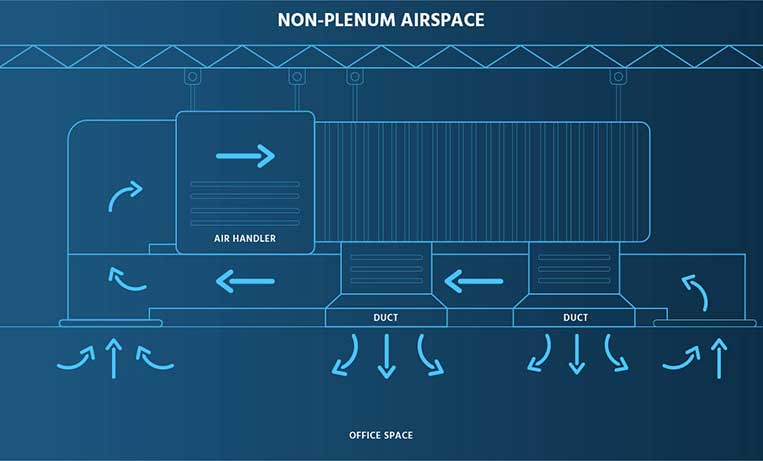 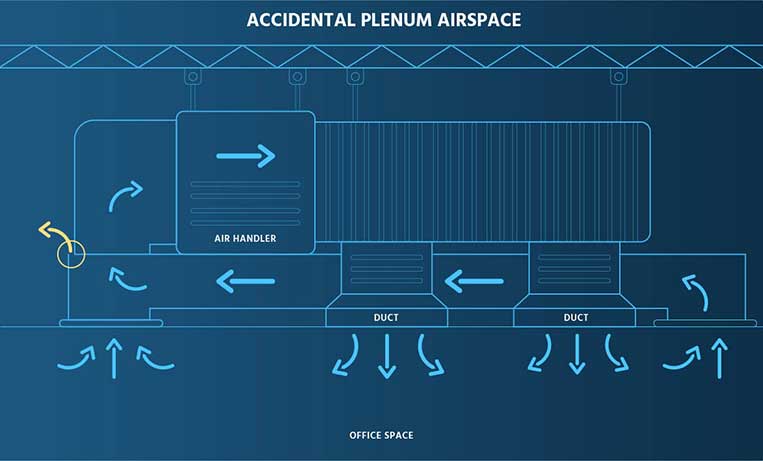 While the above are common use cases for non-plenum cables, don’t forget to check your building code and insurance requirements. They may require you to use plenum cables in non-plenum spaces.

If you’ve determined that non-plenum rated cables will work best for your installation (and budget), here are our most popular non-plenum coaxial cables:

Where is Plenum and Non-Plenum Cable Acceptable?

In the United States, the National Fire Protection Association (NFPA) is in charge of setting fire and building safety standards regarding which cable jacket ratings can be installed in plenum or non-plenum areas and under what circumstances. Those standards are outlined in the NFPA’S National Electrical Code (NEC).

Before the cables can be sold and rated as CMP, CMT, or CM, they must undergo rigorous testing by one of the Nationally Recognized Testing Laboratories (NRTL) and meet or exceed the NFPA’s standards.

Why is it Important to Follow the NEC’s Cable Requirements?

Even though the NEC is not U.S law, it’s commonly enforced by state or local law. The NEC’S goal is to safeguard persons and property from electrical shocks, fires, toxic smoke, and other hazardous situations.

If building inspectors determine that CMP, CMT, or CM rated cables are not being used in the correct areas, your commercial building will not qualify for an occupancy permit, or you may be fined and expected to correct the issue (which can be expensive). Residential buildings must also adhere to NEC cable requirements. If property or life is lost due to a hazardous situation, you can be held liable for negligence due to code violations.

It’s best to comply with the code and spend a little bit of money upfront for the right cable rather than incurring a large expense when the consequences of violating the code hit you.

If you have additional questions about cable ratings, want to know which cable is the best for your system, or anything else, call us at 1-800-919-7442 or email us at (pro@wilsonamplifiers.com) today.