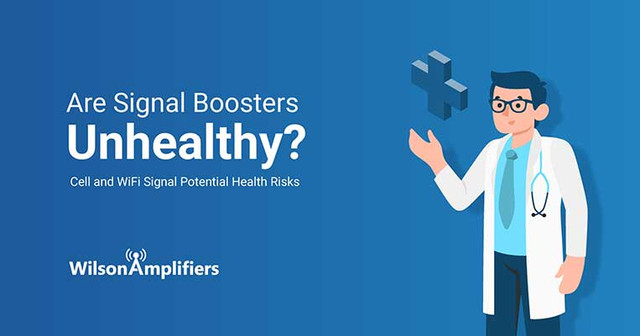 Are Wireless Signals Bad for Your Health? Are Signal Boosters Safe?

Cell phones, WiFi, and Signal Boosters have made our lives so much easier, but do they impose a risk on our health? You’ve probably heard stories about people putting cellphones in their pockets and having health problems later. Are those just legends, coincidences, or extreme cases?

It all depends on who you talk to. There are plenty of theories out there, but let’s look at scientific evidence, as well as discuss things you can do to mitigate any possible risks.

What Do Cellular Devices and Cell Towers Emit?

Wireless telephones send information via radio frequency (RF) signals. These signals are sent between fixed antennas or base stations. There are countless base stations worldwide to make sure your devices have adequate signal. The Federal Communications Commission (FCC) and other agencies regulate how much towers or devices are allowed to emit to protect the public from RF-related health risks.

The World Health Organization, National Cancer Institute, and other sources state that the only definitive data relating to health effects from radio frequency radiation or non-ionizing radiation is an increase in body temperature.

Other studies have been done on non-ionizing radiation and have determined perhaps a little risk. Some research suggests that it may have measurable effects on living organisms, but there is no definitive proof. This is where it gets vague, so it's best to use some caution regardless.

Are WiFi Signals a Health Hazard?

When our wireless router is on, we assume that it is always sending and receiving information, but in reality, these devices transmit data less than 1% of the time.

In addition, the distance signals travel between devices when using a WiFi signal tend to be fairly short and thus don’t need to be very strong. Therefore, they emit less radiation. Strength of signals drop as they get farther away from you. It’s probably a good idea to not always sit in the path of the signal if possible.

The energy emitted from a signal booster is way less than that emitted from a cell phone. Repeaters or boosters use as little as 10mW of power. Also, the signal fades quickly as you move away from the device. In fact, a cell phone booster can reduce the amount of radiation from your cell phone by providing a stronger signal, so the cell phone doesn’t have to use as much energy trying to capture a signal.

To reduce your exposure even more, do not buy more signal booster than you need. If you have a 2000 square foot house, don’t buy one that is for 5000 sq ft just because you think the signal might be stronger.

How Can I Minimize My Risk?

With more and more towers being built and our increased reliance on wireless devices for everything, taking a few precautions is not a bad idea.

If you're on your phone or computer for hours, you're probably at higher risk than someone who just makes a few phone calls. The wise thing you can do to minimize your risk is get away from the path of the signal for some time – i.e. shut it off at night or take breaks to allow your body (and mind) to recover.

The number of devices you are surrounded by may make a difference as well. If you are at home and have one or two devices plugged in, the risk is lower than if you are in a classroom with dozens of laptops and WiFi routers hooked up. Children in their developmental state are probably at a higher risk than healthy adults, so keeping an eye on their exposure time may be a good idea.

Reduce your risk by connecting your devices with cords rather than relying on WiFi for everything. Also, turn off your router or signal booster when you are not using them.

When using your cell phone or laptop, keep it further away from your body. Cell phone manufacturers actually write these in the user manual. Place the laptop or tablet on your desk instead of on your lap. Use the speaker feature on the phone and use it where there is a stronger signal. This way, the phone doesn’t have to emit as much power. A connected earbud might be better than a Bluetooth, but Bluetooth signals are minimal. If you are on the phone a lot, periodic breaks can’t hurt either.

Don’t fall asleep with your cellphone. In fact, put it away in another room, switch it to airplane mode or turn it off.

When setting up your signal booster, find out which direction the signal is coming into your house, place your booster in that area and your devices fairly close to the booster if possible.