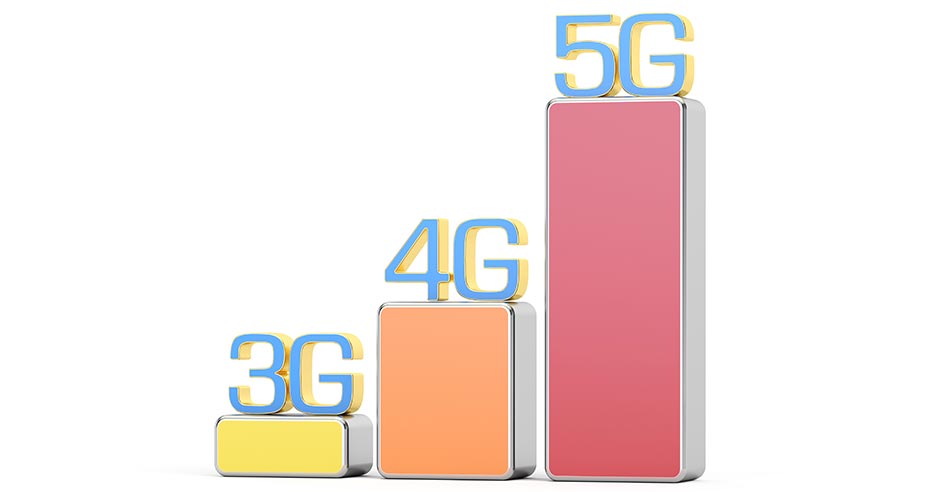 The countdown to the dawning of the fifth-generation has begun.

It sounds like the opening line of a James Cameron Sci-fi movie. And it kind of is…because 5G is going to take us into the future at a new kind of wireless broadband “warp speed”.

By 2020 this wireless broadband technology will have evolved rapidly to the point that we will experience speeds of up to 1 Gb/s for tens of connections. (or tens of Mb/s for thousands of connections) Some major players in the mobile market predict 5G will offer speeds 100X faster than 4G LTE.

We all feel the constant need for speed. All of our devices are wanting stable internet connections. We want the bandwidth for our beloved wireless feed. Our hungry devices demand a new form of wireless signal 5G. Bring it on!


Let’s take a quick look at the 5G family tree. How far have we come?

Each generation’s character has been defined by their data transmission speeds. But as each new generation came into being it was marked by a break in encoding methods which essentially meant it was incompatible with the generation that had come before.

Right now all the major global telecoms and other players are in the process of creating worldwide standards for 5G. The interesting thing is that experts are saying they expect 5G to be backwards compatible with (3G and 4G).


As we add more devices into our lives that require a mobile internet connection we need a “generation” upgrade.

These days we have way more devices than just a mobile or computer. We have security cameras, automobiles, medical devices, door locks, home appliances - all hungry for Wi-Fi signal.

Currently it has been predicted that there will be over 20.8 billion devices connected to the internet in 2020 compared to the 6.4 currently connected.

What kind of power will 5G be packing with its 6Ghz signal? How is your life set to improve with its imminent arrival?


Your mobile phone is essentially a two-way radio.

When making a call your phone converts your voice into an electrical signal and transmits it using radio waves to the nearest cell tower and on to the recipient of your call. The same process happens when you send data across the network.

Every time a new wireless technology is born its gets assigned a higher radio frequency. 4G occupies frequency bands up to 20 MHz and with 5G it’s likely to occupy the 6GHz frequency band. This is because the higher the frequency the less it is in use and so can move the information at an accelerated speed.

But when it’s higher, the signal doesn’t travel as far as lower frequencies. This means that multiple input and output antennas (MIMOs) will be required to boost the 5G signal.


We will get to see this technology, widely available by 2020. Verizon has begun limited testing of 5G in Oregon, New Jersey and Texas with AT&T hot on its heels.

We are all prepared to wait because 5G will bring lightening speed internet connectivity for all of those billions of devices waiting patiently in the wings. We will be forking out for new 5G devices in the coming years because with every new generation we need compatible devices.


We can’t think of 5G in the same way that we think of previous generations.

Firstly, it is not a single technology.

It is a unique mix of technologies, frequencies and approaches requiring totally new ways of building wireless networks. 5G will operate in ultrahigh frequencies that people used to think were not conducive for suitable mobile connection. The frequencies will still need a line-of-sight between the device and the access point.

This means no more big cell towers covering entire neighborhoods with wireless signals. The move will be towards tiny access points positioned everywhere –generating millions of points of presence. (Small Cells) Many of them no bigger than a smoke alarm.

This means a large amount of costly infrastructure which in turn means new business deals between carriers.


Governments are going to have to get actively involved in the intricacies of zoning and permitting. It’s no longer just about zoning cell towers as the new small cell, access points are going to be in every corner.

Some people are saying that 5G doesn’t need this kind of backhaul as Facebook has already been working on an antennae called Terragraph that can connect wireless access points if enough of them have line-of-sight connection. You could cover an entire city using this technology.

The Obama administration recently announced an Advanced Wireless Research Initiative to the tune of $400-million led by the National Science Foundation (NSF). The funding is for four testing sites which will see how small cells and millimeter waves of 5G technology will work in densely populated urban areas. So we will wait in anticipation.


5G is on the Horizon


There has been a total rethink regarding how future technologies are going to be able to go online. We’re talking streaming virtual reality and the Internet of Things.

Our mobile appendages have completely altered the way we live, work and communicate. We know 5G doesn’t really “exist” yet but we know it is on its way. The Federal Communications Commission opened up higher-frequency areas of the radio spectrum in July 2016 paving the way for 5G’s arrival.

The spectrum between 30 MHz and 3 GHz is full and clogged with TV broadcasts, radio and cellular communications. So 5G will move higher where it’s quieter and less crowded.

However, you can be sure that 5G is going to be the carrot dangling to entice us into buying more wireless products and services that are going to plug us into this data avalanche.

Well, until 5G arrives, 3G & 4G are still king of the jungle. And if you're suffering from poor cell service, dropped calls, and slow internet, learn more about how a cell phone booster can instantly boost your signal up to 32x with our handy guide:


How May We Help You?


Wilson Amplifiers is the leading provider of cell phone signal boosters. Cell phone boosters amplify 3G & 4G LTE for any phone with any carrier for home, office, or vehicle.

We seriously hate dropped calls and poor coverage, so it's our goal in life to stomp on spotty signal like the little roaches they are: