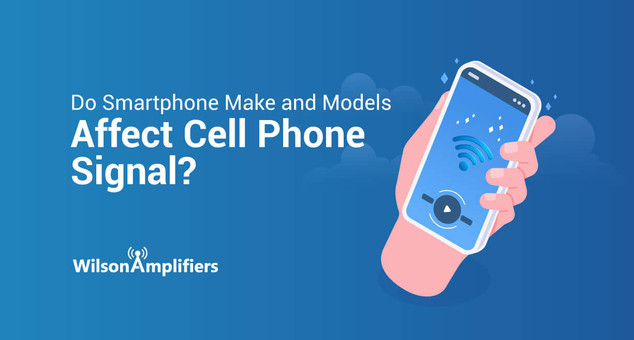 Is My Phone the Cause of Its Poor Cell Phone Signal?

The most common reasons for poor cell phone signal are external factors. Mother nature, the number of people on a network, the location of the nearest cell towers, building material, or a combination of multiple external factors can affect your signal strength.

In addition, many people blame their wireless carriers (AT&T, Verizon, Sprint, or T-Mobile) for cell service issues. The truth is that phone carriers often have little to do with bad reception, they just sell the phones, offer different cell phone plans, and provide you with cell phone service. The only time the carrier is at fault for your cell service being poor is if they simply don’t have any towers in your area – and we’re talking for miles around.

One factor people forget to consider is that the make and model of your phone can affect your mobile signal.

Let’s take a look at different components that can hinder your cellular signal:

How old is your phone? Older phones tend to have weaker reception than newer phones. As technology standards for cellular networks improve (3G, 4G, 4G LTE, and 5G), so do cell phones. If you have a 3G phone, and you are using it under the 4G LTE or 5G network, your phone will not be able to effectively tap into those networks because it doesn’t have the technology to do so, hence the poor reception. Since many carriers are phasing out 3G, you might not get any reception at all.

So, which smartphone would give you the best cell signal? Technically, newer phones will provide you with the best signal reception – whether they are from Samsung, Apple, Google, or LG. They have the technology required to tap into the faster and best networks.

The antenna is crucial to your phone’s hardware; if the phone manufacture incorporates a poor-quality antenna, you will experience poor cell reception.

Many years ago, in the 1980s, cell phones had long exterior antennas to help them capture the best cell phone signal possible. As the years went on, the antennas started getting smaller and smaller. Now, you can’t even see them, smartphones have small internal antennas. The evolution of cell phone antennas has helped phones shrink to pocket size and have an aesthetically pleasing design. Sometimes manufacturers sacrifice a good quality antenna for a better design.

With the antennas being a lot smaller and internal, they are more susceptible to external interference; especially if the antenna wasn’t optimally placed in the cell phone's chassis.

The iPhone 4 antenna issue is the most widely known case regarding poor signal caused by the design and placement of the antenna. This issue caused many users to experience a weak signal when the phone was held in a specific way.

If antennas are so important, then which phone manufacturer has the best antenna? There aren’t many phone antennas manufacturers, the main ones are Qualcomm and Intel. PcMag conducted a test to compare the iPhone Xs and the iPhone X, which use Intel antennas. During the test, they also used a Samsung Galaxy Note 9 and a Google Pixel 2, which use Qualcomm antennas, to see which phone would perform better. The performance of the devices that used Qualcomm were slightly better than those who used Intel.

Another interesting study was conducted by Smartphones Revealed. It was inspired by Professor Gert Frølund from Aalborg University who proved that there is a link between mobile radiation (SAR-value) from cell phones and antenna quality; the higher the mobile radiation, the lower the quality of the antenna. The Smartphones Revealed study tested over a hundred phones (android and ios) and it's easy to comprehend - the higher the score means the better the antenna. The Samsung Galaxy S20 Ultra scored a 95/100, and the iPhone 11 Pro Max scored an 81/100.

It's always recommended to make sure your operating system is up to date. More often than not, the purpose of software updates is to improve performance, patch security gaps, remove bugs, and sometimes they bring in new features. Unfortunately, when updating the software, you run the risk of the new version being worse than the old one and impacting your cell phone reception.

Cell phones communicate with cell towers trough frequency bands. Your phone's hardware helps you connect to those frequencies, but the software guides the hardware and how it performs. If the new updates boost that line of communication between the phone and the cell towers, then you will experience better reception. On the other hand, if the update prioritizes other features, like improved battery life, at the cost of your signal quality, your reception will suffer.

A cell phone signal booster is a device that takes EXISTING cell phone signal, amplifies it for better use, and rebroadcasts the boosted signal into the desired areas. They can amplify existing 3G, 4G, and 4G LTE signals, essentially helping you mitigate signal issues cause by your phone.

The benefits of owning a signal booster are:

Not Sure if a Signal Booster Will Work for You?

Wilson Amplifiers is a leading provider of cell phone signal boosters, devices that amplify 4G & 3G LTE for any phone with any carrier for home, office, or car. We’ve boosted over 10,000,000 sq ft of signal for homes, buildings, and vehicles across America and Canada.

Do you have questions or comments? We can help!
Contact Us
×