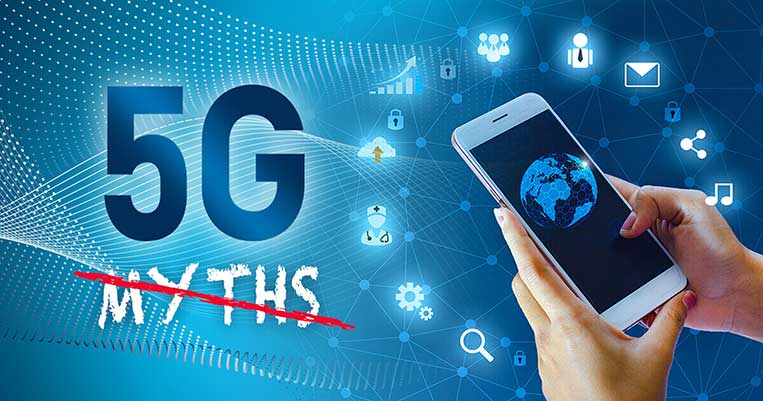 
5G is the latest progression in cellular network technology, following our familiar friends 2G, 3G, and 4G. The differences between the standards keeps getting more confusing. Networks keep getting stronger, with your nearest cell tower probably getting closer every day, and this new generation promises faster speeds for more people and better connectivity than ever before. Cell phone carriers have slowly begun rolling out their 5G programs in big cities all around the world, though it’s still in its infancy for the majority of the population.


Unlike previous generations, which use microwave technology to transmit signals, 5G utilizes much smaller and substantially faster millimeter wave, or mmWave, technology. 5G is more energy efficient, provides faster internet with less bandwidth, and has the capability to support up to a million devices per square kilometer — compared to 4G’s mere 100,000. Millimeter waves use smaller antennas, which would require an increase in transmitters to cover the same area. More antennas and a stronger signal? Cue the concerned consumers.


No, your cell phone is not trying to kill you — and it never has been. Like 2G, 3G, and 4G before it, 5G has been the subject of scrutiny surrounding human health and safety. The cell phone tower-brain tumor connection has been rumored since cell phones first hit the scene, so it’s only natural that the promise of a stronger signal might reawaken old nightmares. Google “5G” and the first suggestions include both “5G dangers” and “5G cancer”. Red flags all around. However, the same search suggestions pop up for 3G and 4G, too, so let’s not toss our phones into the river and run our RVs off the grid quite yet.


It’s not. Change is scary, and new technology has a tendency to breed fear. The cell phone-cancer conspiracy has been around since phones first cut the cord decades ago, but research has failed to provide a definitive link between the two. A plethora of studies have tested the effects of lower and higher frequency radio waves (ie: cell phone signals) on rats and mice, and no conclusive evidence has shown a connection between cancer and cell phone use of any kind. 5G utilizes the same frequencies, and is subject to the same rules and regulations of every previous cellular network generation.

But I Read That Cell Phones Cause Cancer...


In 2011 the World Health Organization released a study by the International Agency for Research on Cancer classifying the radiofrequency electromagnetic fields used by cell phones as “possibly carcinogenic to humans”. Yikes. However, according to Dr Jonathan Samet (University of Southern California, USA), overall Chairman of the Working Group, this 2B classification means that there “could be some risk” and “we need to keep a close watch for a link between cell phones and cancer risk”.

When you slow it down, that’s a lot of “possibly’s” and “could be’s” and ZERO “absolutely’s”. Plus, as Robert Triggs provides perspective in his Android Authority article 5G is not going to microwave your brain: All the myths, debunked: “Other Class 2B carcinogens include pickles, aloe vera leaf extract, and being a firefighter.” Pickles!


Today, mobile phones are in every adult’s pocket, purse, and backpack. If cell phones cause cancer, then shouldn’t the cancer rates have skyrocketed in the past twenty years or so? Guess what? They haven’t. Cancer rates in the United States are actually on the decline — brain cancer rates in particular have stayed the same for the past forty years.

What About 5G and Fertility


Alongside cancer concerns, cell phone use has also been purportedly linked to male infertility. Research on this topic has found one factor to be true: heat. Nothing in the radio waves or frequencies has proven to be a cause for concern — but men looking to conceive should probably avoid hot tubs and storing overheated phones (or really anything hot) in their front pockets or on their laps. Unfortunately, this won’t be a valid excuse to skip those boring conference calls after all.

How to Avoid 5G


5G isn’t the widely available standard we’ve been promised quite yet, but if you’re wondering how to protect yourself from the mythical 5G dangers, the answer is pretty simple: skin. No tin foil hats or space suits necessary. Skin reflects high frequency radio waves, forming a barrier that protects internal organs from potential harm. Turns out, 5G’s higher frequency actually makes it even safer for humans.

So is 5G Safe After All?


The myth of the big scary cell phone signal stems from unfortunate misunderstandings when people attempt to interpret scientific research. While the evidence has yet to prove that 5G is bad for humans, there is always ample room for more research. Cities across the globe are pressing pause on the 5G network rollout until more is known about the potential risks of 5G exposure, but as it stands, there is no real reason to worry.

Instead, do something that is proven to be great for brains: learn. So keep reading, researching, and asking questions — and direct your precious energy away cell phone signal stress. Give your current 3G and 4G signals a helping hand from cell phone signal boosters. And unless new research proves otherwise, take solace knowing that the scariest thing to come from your phone might just be those dreaded texts from your ex.

Any other questions or concerns about 5G? Let us hear them in the comments below!

How May We Help You?


Wilson Amplifiers is the leading provider of cell phone signal boosters. Cell phone boosters amplify 4G, LTE, and 3G for any phone with any carrier for home, office, or vehicle.

We seriously hate dropped calls and poor coverage, so it's our goal in life to stomp on spotty signal: